The Blériot XI was designed and built by Louis Blériot of France in 1909. In this aircraft, Blériot became the first man to successfully fly across the English Channel. Another important “first” was the 1910 flight over the City of Montreal by Count Jacques de Lesseps in his Blériot XI christened “Le Scarabée”. This epic flight was the first over a Canadian city. Members of the Montreal Aviation Museum are currently building a full-scale reproduction of the Blériot XI from an original set of plans.

May 23 2019 marked 10 years since the Canadian Aviation Heritage Centre (CAHC) – known today as the Montreal Aviation Museum (MAM) – oﬃcially opened its doors to the general public.
A lot of cleaning took place before this opening day, renovating and transforming inside and outside of what is known as the ‘’Old barn’’. Our founder Godfrey Pasmore and his dedicated volunteers worked relentlessly to make sure that everything would be in place when the time came to present our museum to its visitors.

Because of the stone structure, all the walls needed to be insulated and the roof repaired. In the early stages, workshops had already been established to start building the two ﬁrst aircrafts (FC-2 and the Bleriot). The other space available on the ﬁrst ﬂoor also needed to be reorganised with new windows and walls so it could accommodate an artifacts oﬃce, a conference room, the library and yes, washrooms. One other very important space needed was for an art gallery where the Godfrey Pasmore aviation collection would be showcased to the visitors. In the early days, the second ﬂoor was a workshop/storage space. Insola􀀁on of the walls was needed among other repairs, and a staircase was built in the main silo to access it.

During that ﬁrst decade of major preparations, 3 aircrafts were being built: the Fairchild FC-2, Blériot ‘’Scarabée’’ the Fleet Canuck as well the Link trainer was operationally restored. The artifacts/exhibition sections and the library were also gearing up for the big day.
After all those years of planning and hard work, the board of directors under the leadership of Godfrey Pasmore decided that the museum was ready to have the public come through its doors.
On the 15th of May, a ﬁrst event was hosted for 120 ‘’VIP’’ to visit ﬁrst hand the museum and meet with the volunteers involved with the diﬀerent projects. All the visitors were very impressed by our museum, the diﬀerent projects and especially by its volunteers.

The following week on Sunday May 23rd the museum held its oﬃcial opening ceremony at the main entrance of the museum (main silo) where close to 300 people a􀀃ended.
Erika-May Poulin-Pasmore welcomed everyone on behalf of her father and founder. After a few speeches the ribbon cuttng ceremony was done by Erika-May and Godfrey surrounded by special guests: John Lawson (CAHC), Robert Piché (pilot Air Transat), Bill Tierney (Mayor of SABV), Francis Scarpaleggia (MP for Lac St-Louis) and Chandra Madramootoo (Dean of Agriculture MacDonald Campus of McGill) and declaring the Centre oﬃcially open! A special moment followed with several ﬂypasts of seven vintage aircraft led by one of our members – Marcel Deschamps.

Since the opening of the museum in 2009, CAHC continues to provide many more ac􀀁vi􀀁es and changes such as fundraisers, special conferences, events, diﬀerent media coverage, acquisition of new aircrafts and ar􀀁facts, new displays, aircraft rollouts, new road signs and more. 2017 marked a milestone by taking on the new identity of the Montreal Aviation Museum and logo.

Today MAM is a well-established aviation museum proud of all its achievements and it will continue through its dedicated volunteers and supporters to promote Canadian aviation history to its visiting public, with a special focus on Quebec’s contributions.

A new section, TRIBUTES, is being introduced to our website to pay homage to our members who have passed away and contributed significantly to the museum’s advancement.

Today we recognize Richard Plante one of the museum’s board members (2003–2009). He instigated and led the construction of our Blériot XI aircraft Le Scarabée.

Thank you for your visit and support!

We hope to see you soon. 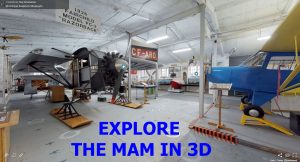 How to get to the museum 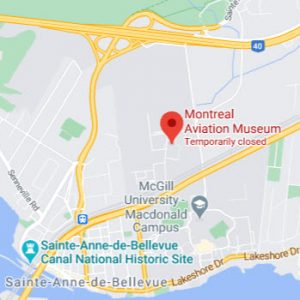